This weekend was a long one. I intended to take Friday off to get caught up on some writing, instead I escorted my family around Manhattan prior to going to a memorial dedication service. My grandmother is a US Anzio veteran, and one of the few left alive of a rapidly dwindling breed. I have as many mixed and conflicting feelings about war as I do about many other things, so this was an odd circumstance to attend.

Several years ago, the US Navy commemorated a ship, named after the battleground. My grandmother was there for the launch of the ship. All of the sailors on board idolize the few living veterans remaining today, and there is a very strong connection between these younger members of the armed forces, and people who, on average, are 60 years their senior.

The overall event was very touching for her. The mayor of Anzio was there, and there was much speech making and placard giving. While the initial tone of the speakers was very solemn, bordering on sad, it really took a turn when a politician took the podium, followed by a chaplain. Then I saw the teeth of the government I loathe, and, honestly, being one of two people in a large crowd who were not applauding the expressed sentiments, am more than a little afraid of.

There are also some pics in there of my aunt, cousins and myself on top of the Empire State Building.

After running all over Manhattan to see the empire state, then all the ships in port, we went to a great dinner at Masseria (235 W 48th St b 8th and Bway). From there, I went downtown to see Xmen 3. If you read this stream of tripe at all regularly, you already know my experiences on that.

Saturday was spent chilling and relaxing. I had plans for the evening, but none of them quite worked out how I wanted them to. Sunday was a barbecue extravaganza, wherein we had some great burgers, and I made four gallons of Sangria, and three gallons of margarita. Yesterday was a geek day. All, in all, a full weekend. 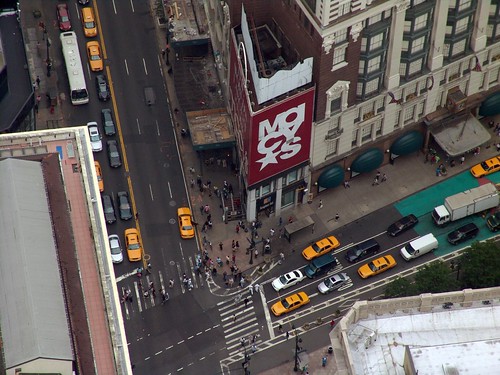