If you think you saw this already when I posted it, watch again, it is not the same.

A Favorite Poem
What is one of your favorite poems?
Reply 228
In a word, Beowulf.
I am a huge fan of literature, but I am more of a fan of storytelling. Beowulf is like a literary archaeopteryx. It offers just as much insight as mystery, and shows a truly transitive state between the oral and written traditions. Beowulf is written in a since-dead form of English, but one which can be read with a little work by anyone who undertsands the fundamentals of Russian/Latin/German, and the roots of many of the words we use every day. It is written without a division between history and mythology - many of the people, places, and things in Beowulf are real, and have been substantiated archologically. This creates a poem in which the underpinnings of the language and style mirror the content and its presentation.

How many of you out there hate history? It is an astoundingly fascinating subject, yet many people find it hopelessly dull. Many of you may have heard of Paul Bunyan or Johnny Appleseed - these were "modern" inventions meant to re-create a Beowulf experience. Create a captivating story that people will enjoy re-telling, and you find a way to get at histry in an entertaining way. I imagine many of you have very little difficulty remembering the plot and order of your favorite movie(s) - this is because they are entertaining. At a detail level, however, they are probably more, if not equally complex as memorizng a bunch of major events and dates concerning a historical point on a timeline.

I can go on and on about Beowulf in regards to the historical signifigance, which is tied to its impressiveness as a piece of literature, but doesn't fully emphasize its poety.

Beowulf, like most Old Eglish works, is heavly laden with kenning. To me, next to haiku, kenning are one of the most complex forms of poetic prose out there. The skalds who used kenning were wordsmiths, in the truest sense, not just Hallmark rhymers. They would create images that depended on the subtext of images, sometimes as far out as the seventh order! The idea that so much can be contained in so little, and that so much of the beauty is dependent on the eyes, and sometimes ears of the beholder/listener, is, to me, the root of poetry.

e.e. cummings still has a place in the sound of his poetry, but he doesn't stand out the way he did in print. Demodocus , though probably unimaginably beautiful in oration, comes to us now only in print, as there are no recordings of his voice. Poets old and new try to strike the balance between thier ability to create image with word and sound, and Beowulf does both for me. Read aloud, it is beautiful sounding, even if you don't understand what it means. If you do understand what it means, you are enmeshed in the meanings and kenning - the games of words within stories of poem.

Monsters, kings, conflict, politics, and a hero, all mixed in with history and traditions, all over a thousand years old, and living today. Not living the way it once did, on the lips of skalds in darkened halls by crackling fire, but living in a way which none of those voices would have ever imagined. 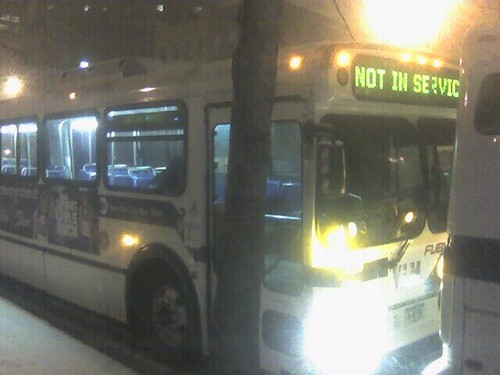 You have new Picture Mail!, originally uploaded by delascabezas.

No busses north of 79 at least the driver has a paper...